It’s May the Fourth: Star Wars Day! I’ve been hard at work planning the day’s festivities, and especially the music that will accompany them.

The four-decade-plus history of Star Wars offers a rich trove of music to choose from. The most obvious example: John Williams’ scores to the Skywalker Saga films are undeniably some of the greatest scores ever written. But while Williams’ music does a near-perfect job of transporting you to a galaxy far, far away into the heart of a cosmic struggle of good against evil, today I’m more interested in the music that puts you on the ground amidst the endless action in George Lucas’ grimy, hardscrabble, “used” universe.

Source (or “diegetic”) music refers to music actually heard by characters in a movie or TV show—say, a band fumbling through “Louie Louie” at a high school dance, or a song playing on a radio somewhere in the background. Like a film’s score, source music can serve to establish the mood of a particular scene and provide aural cues for the action unfolding on the screen. It can also create a sense of place that, especially in science fiction and fantasy, makes the settings seem all the more “real” (if not also “otherworldly”).

There’s plenty of source music to be found in the Star Wars universe: from the jazz-inflected Figrin D’an and the Modal Nodes tune in the Mos Eisley cantina in A New Hope to (shudder) “Jedi Rocks” and the Ewoks’ celebratory “Yub Nub” in Return of the Jedi, from the Gungan Augie’s Great Municipal Band in The Phantom Menace to the “Squid Lake” performance by the Coruscant opera company in Revenge of the Sith. And the Disney era has brought still more. Even as recently as a month or so ago, an episode in the final season of The Clone Wars gave us a bit of source music in “Café Coruscant.” 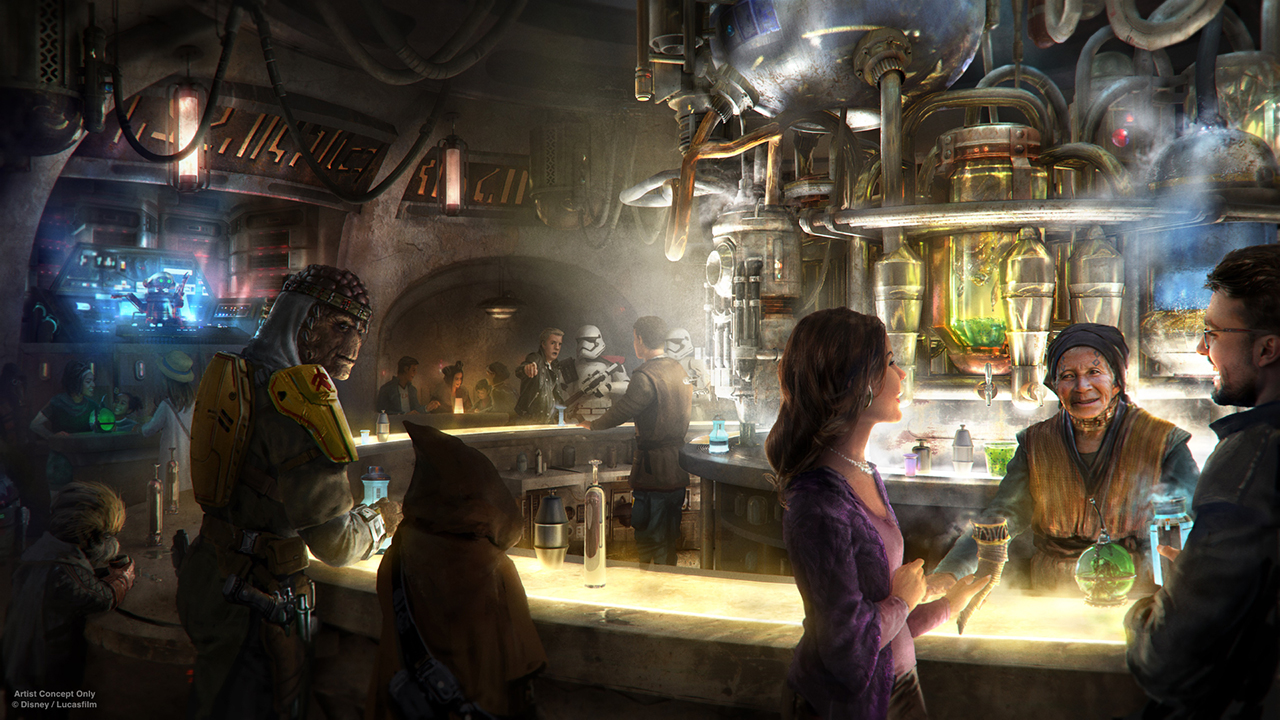 Oga’s Cantina is, of course, a clever bit of marketing. You enjoyed your experience at the park? Now you can recreate that experience in your own home! But it’s also a fascinating exercise in something neither Lucasfilm nor Disney has ever sought to do: create an entire body of music to impart a sense of what the Star Wars universe really sounds like. Ultimately, it adds another dimension to the world-building project at the heart of the franchise.

Disney knew Galaxy’s Edge was going to have a cantina where park visitors could tuck into a Ronto Wrap or down a Carbon Freeze or a Cliff Dweller. The inevitable next step in the Imagineering process was to figure out what sort of entertainment the cantina would offer. An adorable droid DJ was probably the obvious answer. This then raised the question: What kind of intergalactic hits would a droid DJ spin for a motley group of questionable clientele in a rough-and-tumble cantina in a dusty outpost in the far reaches of the galaxy?

Fortunately, Spiwak had an answer.

“I think one of the cool things about Imagineering is that we don’t only imagine architecture or stonework. We also reimagine music,” he said. “How to stay true to the movies and still be inspired by them, but also represent the place that is coming to be. And a trick that we used is mixing a lot of different styles of music and kind of create a new one. Like, we would take a little bit of Middle Eastern and mix it with Chinese and put African vocals on it, and then put it in a Pro Tools session and filter it and reverse it, and then basically if you can’t recognize the instrument, or the style, that’s how we kind of made it out-of-worldly.”

The result was an often-intoxicating brew with hints of Middle Eastern music, K-Pop hits and EDM. The album features such fictional acts as Sentient 7 and the Clankers (“Droid World”), The Dusty Jawas (“Utinni”) and Fytee & The Sleemos (“Yocola Ateema”). Figrin D’an and the Modal Nodes make an appearance—two, actually, if you count R3X’s remix of the group’s “Mad About Me,” the tune that started it all in 1977. So does one RB Snootles, presumably some kind of relation of Sy Snootles of Jabba’s Palace Band fame.

Not surprisingly for a collection of hits from across the galaxy, the album is multilingual, incorporating as it does a variety of alien languages. In some cases, Walker and Spiwak encouraged the songwriters to have a bit of fun and create languages of their own. In others, they used languages already established in the Star Wars universe. We had two great guys from LucasFilm, Matt Wood and David Collins, that helped us write the lyrics for some of these songs,” Spiwak continued. “Especially the songs in Huttese. And also we had a Jawa song called ‘Utinni,’ so that’s in the Jawa language.”

Just a Bunch of Fake Boy Bands and Girl Groups

From ‘Cantina Band’ to Power Ballads and Pop-Punk: The Evolution of Source Music in the Star Wars Universe

Beyond the Vulcan Harp: Constructing Musical Traditions in Science Fiction and Fantasy