Roger Dean’s paintings loom large in the history of progressive rock, the fantasyscapes gracing the covers of countless Yes albums as well as records by Steve Howe, Asia, Gentle Giant and others. As evocative and visually compelling as they are, though, they’ve only occasionally been translated to video and film.

This is, to say the least, a missed opportunity. Instead of sitting in our bedrooms staring at Tales From Topographic Oceans and Relayer wondering what actually went on in those worlds, imagining where the riders on horseback were heading and what message they bore, we could have been exploring the fantasyscapes in rich detail as the stories played out.

Dean himself apparently feels the same way. The 2008 book Dragon’s Dream describes the artist’s views with respect to the potential of the moving image.

“To make a movie would always, for Roger, be a wonderful opportunity to create an alternative reality; to explore other worlds in space and time, using the latest in animation techniques. It seems to Roger that, with good fortune and determined clients, the architecture can be built and physically explored; as can some of the landscapes. His iconic Floating Islands were always going to require a virtual world or movie in which to exist.”

The eighties would have been the perfect time for this, what with the rise of MTV and prog’s commercial peak. Near as I can tell, though, there are only three examples in the eighties of Dean album covers making the leap to video. Probably the most well-known of these is the 1983 promo clip for the Top 10 Asia hit “Don’t Cry,” which sees guitarist Steve Howe, keyboardist Geoff Downes, drummer Carl Palmer and singer John Wetton traversing both jungle and desert in a perilous adventure set in the world of the artwork from Alpha, the band’s second album. 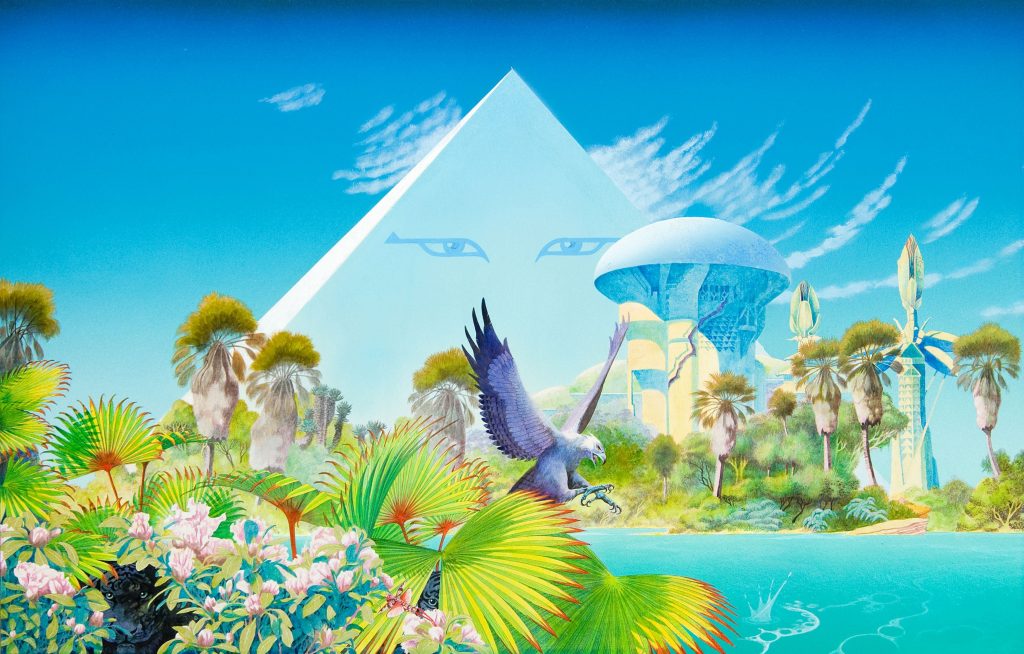 The artwork certainly lent itself to this interpretation. The painting used for the cover was inspired by a photo taken by Roger’s brother Martyn, of a Buddhist monument called Boudnathe Stupa 10 miles outside Kathmandu. The stupa featured a stepped pyramid above its dome and around the base of the pyramid were four pairs of eyes — the eyes of Buddha — staring out across the land. Roger adapted these eyes for a “scene from the imaginary Orient suggested by the band’s name,” according to Magnetic Storm, a 1984 book of Roger’s work. Viewed from a certain perspective, the artwork suggested the kind of environment where you might find an adventurer from a 1930s movie serial: an exotic locale with mystery and danger lurking around every corner.

Actually, more to the point, it suggested the kind of environment where you might find an adventurer from a 1980s pastiche of a 1930s movie serial.

Released in the summer of 1981, the George Lucas-Steven Spielberg blockbuster Raiders of the Lost Ark told the tale of swashbuckling archaeologist Indiana Jones, played by the ever-suave Harrison Ford. The movie was a critical and commercial success, becoming the highest-grossing film of 1981 and creating a deep impression on the pop culture psyche. By the fall of 1982, Raiders had inspired two TV shows with very similar settings and themes: Tales of the Gold Monkey and Bring ‘Em Back Alive, the latter featuring a fictionalized version of real-life thirties adventurer Frank Buck.

The latter were still on the air — and Raiders still in the air — when Asia started planning a video to accompany “Don’t Cry,” the lead single from Alpha. Brian Grant, who had created videos for everyone from Peter Gabriel and Queen and to Olivia Newton-John and Duran Duran, was brought in to direct. According to Wetton, it was Grant’s idea to set the video in the world of the album cover artwork. “They recreated the album cover, with the clouds and the pyramid and the jungle,” he said in an interview quoted in the Asia biography The Heat Goes On. “It was tremendous fun.”

Wetton may have fonder memories of the video because his role in the narrative was far less goofy than the others’. While he lip-synced the “Don’t Cry” lyrics in a desert bar, surrounded by extras dressed as Nazis and Bedouins, Palmer hacked his way through the jungle and nearly drowned in a patch of quicksand, Howe scrambled along and then fell off a rocky precipice, and Downes, dressed in robes and a totally eighties headband, struggled over desert dunes toward a fake-y pyramid in the distance. One of the goals of the video was to show a lighter side of the group, to poke holes in their image as just another pompous progressive rock band. But in the end, Downes explained in another interview quoted in The Heat Goes On, it was all kind of embarrassing. “We were trying not to be too serious,” he said, “but we may have taken that too far.”

The video shoot took place over two days in July 1983 at Twickenham Film Studios in England. The budget for the clip, which was shot on 35-mm film, was reportedly $100,000. Melody Maker writer Chris Welch, a longtime proponent of prog rock, visited the shoot and, in his 1999 book Close to the Edge: The Story of Yes, painted an evocative picture of what he found.

“The large studio was packed with musicians, film technicians, extras and assorted directors and cameramen,” he wrote. “The group were in make-up and costume and Steve [Howe] was having the most boyish, carefree fun since the days of [early band] The Syndicats. The Khaki-clad musos were expected to act like silent movie stars on an elaborate set depicting the African jungle. Wearing shorts and sweating under the arc lights they were hemmed in by palm trees overlooked by a huge mock pyramid. The set was alive with jets of water and sheets of flame and the extras giggled as the group tried out their acting skills.”

The “Don’t Cry” video helped push the single to No. 10 on the Billboard Hot 100 chart and No. 1 on the Billboard Top Album Rock Tracks chart. But the success of the single didn’t translate to the album as a whole. While Alpha generally performed well, climbing to No. 6 on the Billboard 200 album chart, it ultimately failed to meet expectations.

And that wasn’t the only setback. Roger Dean had envisioned a marketing campaign that had the eyes featured on the album cover — and alluded to in the final shot of the “Don’t Cry” video — appearing everywhere during promotion of the album and accompanying tour: in store windows, on posters on the sides of buses, on every page of the tour program. Unfortunately, any plans for such a campaign were scuttled when soft ticket sales led to the cancellation of the second leg of the tour.

The band didn’t give up on the idea of bringing Dean’s album covers to life. In 1985, they would produce another video set in the world of one of Dean’s paintings: this one, the more science fiction-y artwork found on the cover of Astra. The video for “Go” would prove more successful than the “Don’t Cry” clip — or at least less goofy. I’ll explore how and why in a future post.